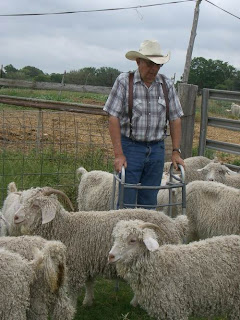 Fritz Kuebel has been raising Angora Goats in Texas for nearly a lifetime. Many, many Angora Goat breeders in Texas and around the country can trace their goats’ lineage to Kuebel bloodlines. Most of our most highly prized, fine hair, genetics show Kuebel ancestry. Several years ago he suffered an injury to his hip and has been dependent on using a walker to get around. For a less dedicated producer, an injury such as that would put a halt to their ability to work goats, but not Mr. Kuebel. As you can see, he’s still out there in his catch, evaluating goats and selecting the best to breed. As the saying goes “You can’t keep a good man down”.